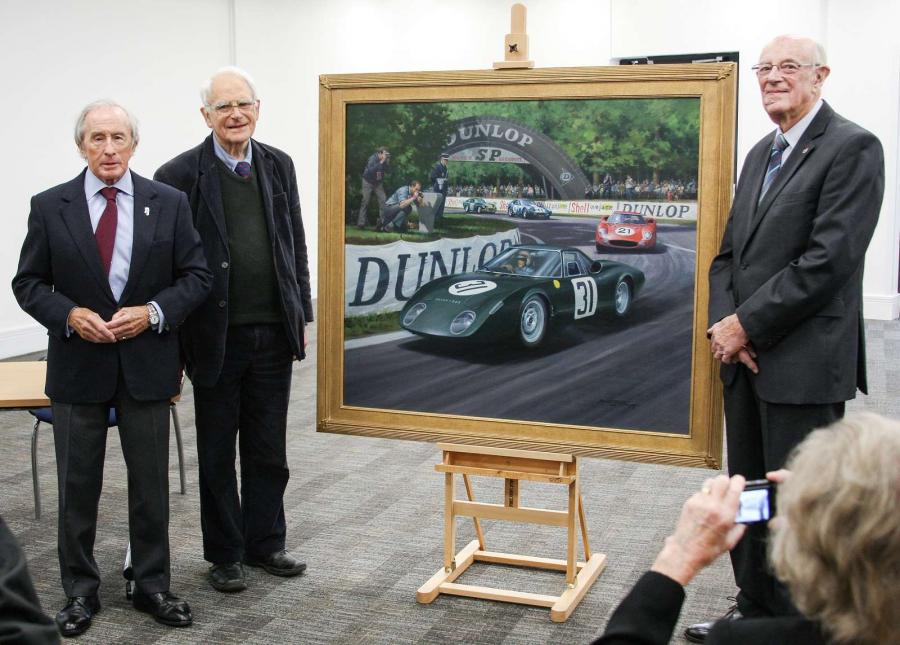 Sir Jackie Stewart unveiled a new oil painting of himself driving the Rover-BRM gas turbine racing car in 1965 at the British Motor Museum on 29 September. The painting was commissioned by the Museum following a very generous donation from David Owen OBE and Rubery Owen. The Owen Organisation were owners of the BRM racing team. The special event was also attended by renowned motoring and aviation artist, Michael Turner who was commissioned to paint the work and Steve Cropley, Editor-in-Chief of Autocar magazine who chaired a Q&A session.

It was a chance conversation between Sir Alfred Owen and Rover's boss William Martin-Hurst that led to the creation of the Rover-BRM gas turbine racing car. It first competed with Formula One drivers Graham Hill and Ritchie Ginther in 1963, securing a prize for the first gas turbine powered car to complete the Le Mans 24 hour race. In 1965 a much updated Rover-BRM returned to Le Mans when Hill was joined by BRM teammate Jackie Stewart (now Sir Jackie) where it finished the race in 10th place, the first all-British car home.

Michael Turner had previously painted the Rover-BRM, in action at Le Mans in 1963, with Graham Hill at the wheel. His new painting, with Sir Jackie Stewart in the driver’s seat in 1965 depicts the Rover-BRM closely followed by the eventual race winner, the number 21 Ferrari 250LM of Rindt and Gregory, together with Jack Sears and Dick Thompson's AC Cobra Daytona coupé and the Thuner/Lampinen number 60 Triumph Spitfire, which would finish 10 laps behind the gas turbine car. The detail in the scene is made ever more evocative as Michael was there at Le Mans in 1965 to watch the Rover-BRM in person, capturing his own set of photographs.

When asked what the car was like to drive, Sir Jackie commented “It was bloody awful but there was nothing like it at the time! Driving the car at Le Mans was a revolution. The painting, too, is wonderful and a real piece of history. Michael is one of the best motor- racing artists and there are not many artists that can approach what this man can do. I have many of his paintings at home and in Switzerland. Its not easy to portray the cars in the right way, for example to get the tyres to behave accurately - but Michael does it”.

Stephen Laing, Curator at the British Motor Museum said “We are delighted to have been able to commission this wonderful painting, made possible by Sir Alfred's son, David Owen OBE who is a keen supporter of the Museum. It was a great privilege that Sir Jackie Stewart was able to unveil the painting which will be hung next to the Rover-BRM, one of the most prestigious cars in the Museum’s collection”.

To find out more about the British Motor Museum please visit https://www.britishmotormuseum.co.uk or call 01926 641188.