The results of the 2019 National Cost of Ownership Survey have been announced by the Federation of British Historic Vehicle Clubs. The summary results were revealed at a press conference within the Houses of Parliament on 14 May with the full research document now available to download.

Historically, the Federation has undertaken major research projects every 5 years, the most recent being the 2016 National Historic Vehicle Survey. Back then, the data revealed that the historic vehicle industry employed 34,900 people and generated £5.5 billion towards the UK economy. However, to gain more up-to-date insights into the attitudes and interest in transport heritage and the ever-evolving pressures on enthusiasts using yesterday’s vehicles on tomorrow’s roads, the Federation has produced its first ever ‘mid-term’ survey. 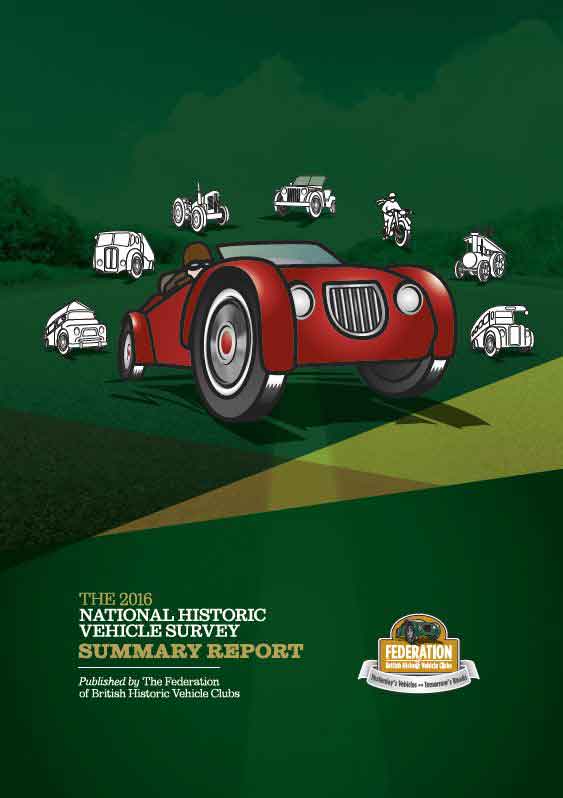 The objective of the 2016 National Historic Vehicle Survey is to provide an update to our 2011 report and to create a new and fresh valuable resource to the industry. The results of the survey have been published in two parts: the first part, a Summary Report, giving the key findings and facts which runs to 12 pages and the full Structural Report which stretches to over 70 pages and provides a wealth of detailed data

It is hoped that its findings will stimulate understanding of the sector across a range of important stakeholders including government and politicians, international partner bodies, together with historic vehicle enthusiasts and interested members of the British population.

The reports include a very detailed picture of national interest in historic vehicles, as well as an exploration of historic vehicle characteristics and owner spending patterns together with an update on employment trends and employer perspectives towards the sector.

An assessment of the British historic vehicle movement undertaken in conjunction with the Historic Vehicle Research Institute. This project was carried out by Dr Paul Frost, Dr Chris Hart and Dr Jaime Kaminski supported by past Federation Secretary, Jim Whyman.
Data was obtained by questionnaires (electronic and paper) submitted to traders, clubs, club members, museums and individuals.
The project looked at five main areas: economic value, employment, use of historic vehicles, social activity and concerns for the future
Key results:

The presentation of the report to politicians and media took place in the House of Lords on 6 December 2011 at a reception hosted by Federation President, the late 3rd Baron Montagu of Beaulieu who was also President of the All-Party Parliamentary Historic Vehicles Group.

During the period from 2010 until 2013, the Federation in association with the University of Brighton conducted a number of impact assessments of various historic vehicle events and the reports are presented here in reverse chronological order:

In the words of Lord Steel of Aikwood, the economic impact study of the 4th European Healey Meeting at Crieff in May and June 2013 broke new ground for the Federation. Previous studies had been broad based, assessing either the generality of historic vehicle activity in the UK or the specific local benefits of major events that attract large numbers of the general public. This study was narrow in its focus, concentrated on one marque of car, Austin Healey, and with insignificant public participation. It also for the first time explored the more northerly extremities of the country.
Key results:

The study was unveiled at a presentation on the Austin Healey stand at the Classic Motor Show at Birmingham's National Exhibition Centre in November 2013.

The study found that the annual Beaulieu International Autojumble created a local economic benefit of £3 million to the New Forest area. It further concluded that the event provided direct temporary employment in the region for over 220 people and also benefited local hotels and guest houses, being directly responsible for over 11,000 person nights of accommodation.
It is truly international and in 2012, the year of this study, it attracted more than 38,000 visitors, nearly a quarter of whom came from overseas.
Held over three days in September, the autojumble was responsible for over £11 million turnover for the national economy and contributed over half a million pounds to the UK Treasury through VAT.
The report was unveiled in February 2013 at a press conference held at the National Motor Museum, Beaulieu.

The Goodwood Revival study was unveiled by Lord March at the press launch for the 2013 Festival of Speed and Revival Meeting. It found that the annual Goodwood Revival brings a conservative £12 million of business to the local area, including Chichester and Bognor Regis to the south of Goodwood, and Petersfield and Midhurst to the north.
In addition, the FBHVC and University of Brighton research found that the 2012 Goodwood Revival was responsible for a healthy £32 million turnover for the national UK economy, net of VAT, with over £4 million generated in VAT to Government revenue. The event also led to direct temporary employment for more than 350 people.
The independent study also revealed that the Goodwood Revival generates over 23,000 ‘person nights’ of accommodation for local hotels and guest houses, plus a further 25,000 person nights outside of the 20km radius study area

The first economic impact study to measure the benefits for a local community resulting from an historic vehicle event taking place in the locality. The event studied was the 2010 London to Brighton Veteran Car Run and the locality considered was the City of Brighton and Hove
Key result: