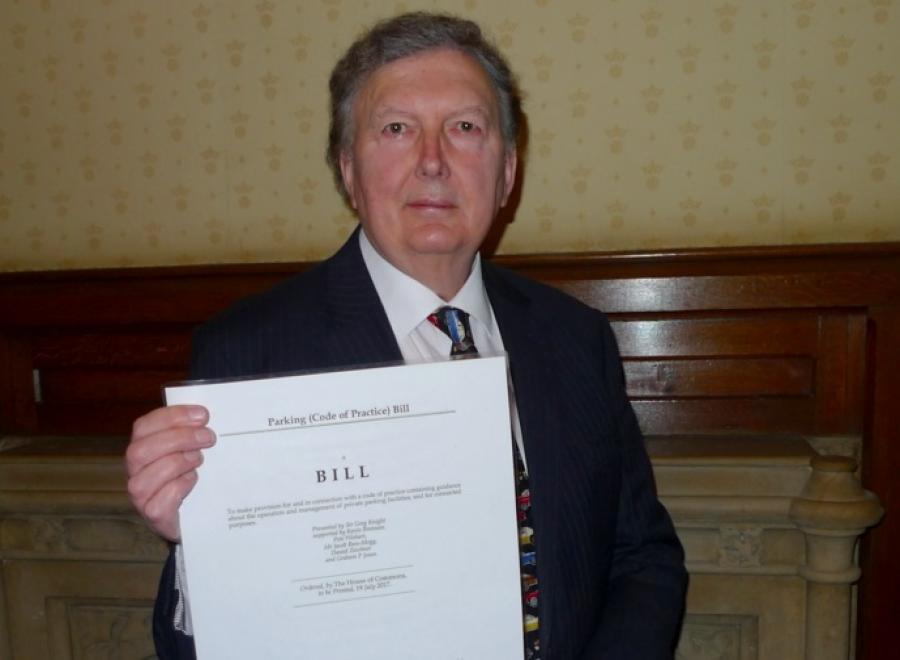 East Yorkshire MP Sir Greg Knight has achieved a change in the law with his Private Member’s Bill, the Parking (Code of Practice) Bill, which has been passed by both Houses of Parliament and is now awaiting Royal Assent from the Queen to become law.

In each Parliamentary session only 1% of MPs manage to change the law through the Private Members Bill procedure.

Commenting, Sir Greg said: “I consider myself extremely fortunate to have put this legislation on the statute book. It clearly shows that politicians of all parties believe that a law change here is overdue”.

Following the ban on wheel clamping in 2012, privately issued parking ‘tickets’ soared to 4.7 million last year – one every 7 seconds with a number of these issued in dubious circumstances.

Sir Greg said: “The clear majority of car park providers are honest and fair but unscrupulous rogues are undermining the whole sector with bad practice”.

Sir Greg’s Bill, which enjoyed cross-party support, including the backing of the Government, introduces a statutory code of practice for private parking companies which will prevent motorists being unfairly treated.

Sir Greg explains: “These dodgy operators have been engaging in practices such as deliberately unclear signage, ticketing people whist they are getting change and even when their own parking payment machines are out of order. Until now the law was powerless to prevent this”.

“This new law will do nothing to diminish the rights of landowners to earn a fair income from their land, including seeking redress when motorists don’t play by the rules. But the scales needed to be rebalanced, so the system is now fair for all involved. This change will help stamp out rogues in the industry”.

“I thank all those who helped the Bill to become law, particularly, but not exclusively, Lord Hunt of the Wirral who took the Bill through the House of Lords, Government Minister Rishi Sunak and the Labour Opposition Spokesman Andrew Gwynne MP.

Labour’s Andrew Gwynne MP commented: “I thank Sir Greg personally for his tenacity on this issue. He will be the champion of drivers across the land, because we all know, and can all tell stories of constituents who have been clobbered by these sharp practices”.

The Government will be consulting on the contents of the new Code of Practice, which they are now mandated to introduce, shortly

Federation meets with DfT regarding consultation on proposals to ban tyres over 10 years old on cert...