King Dick Tools have been proudly made in Birmingham since 1856.  Starting out as Abingdon Engineering and manufacturing a range of components, rifles, gear boxes, chains and motorcycles, the company developed into making high quality tools. The King Dick name and logo was adopted, it was that of the Company Owner's show winning bulldog and was seen as being symbolic of British tenacity and strength of character . . . the KING DICK brand was born!

Motorcycles were manufactured between 1905 and 1932 and with the active support of Bill Whiteley, the company has displayed 1910 Kerry-Abingdon 3 ½ hp and 1930 Abingdon King Dick Model 40 motorcycles on its stand at the Lancaster Insurance Classic Motor Show, with Discovery at  the National Exhibition Centre in recent years.

The King Dick brand is probably most remembered for the adjustable spanner in its iconic shape and there can be few enthusiasts’ toolboxes that do not provide a home for at least one example as they were available in varying sizes.

But most importantly, in a world where preservation of historic vehicles is becoming ever more popular, King Dick spanners and wrenches are manufactured in metric, AF (SAE) and older British sizes such as BSF, BSW (Whitworth) and BA.

In October 2018, King Dick Tools joined with the Federation to launch the AKD Heritage range to provide enthusiasts with traditional looking tools to enhance their historic vehicles.

With a design inspired by the original tools, they are produced using state-of-the-art materials and processes and feature a tough, chrome-molybdenum finish.  Harking back to a time when prestigious cars of the 1950s and 1960s were equipped with King Dick tools, the new range will be a great addition to any toolbox.

The AKD Heritage collection is available to buy online at https://www.akdheritagecollection.co.uk 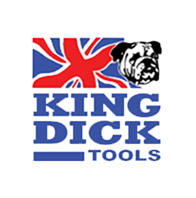