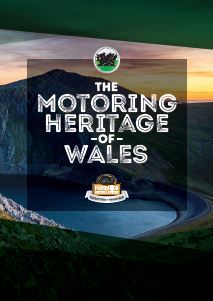 To the best of our knowledge the motoring heritage of Wales has not been chronicled and the Federation asked our projects coordinator, Chris Cartmell, to start the task.

Of course, with work of this type as soon as the document is published, people with greater knowledge than us will say ‘what about…?’ All contributions will be warmly welcomed and credited in the interests of producing a more comprehensive document. We have limited ourselves to road transport powered by a motor of some type and as bicycles formed the early basis for some of these machines, where relevant they are mentioned as the beginning of the story.

Looking back on the early timeline for transport in Wales, it can first be traced back to pre-historic trackways, where the ancient Britain’s hauled the bluestones from which they built Stonehenge in or around 2500BC. We then move on to the Roman roadways, the industrial revolution, and the turn of the 19th century, the introduction of the first motor vehicles and aviation in Wales at the very start of the 20th century.

The seven-mile Pendine Sands is part of motoring folklore, specifically the land speed records in the 1920’s by Malcolm Campbell and John Parry-Thomas, who died during the attempt in 1927. All of which can be found at the Pendine Sands Museum.

You can download the FBHVC - The Motoring Heritage of Wales here.